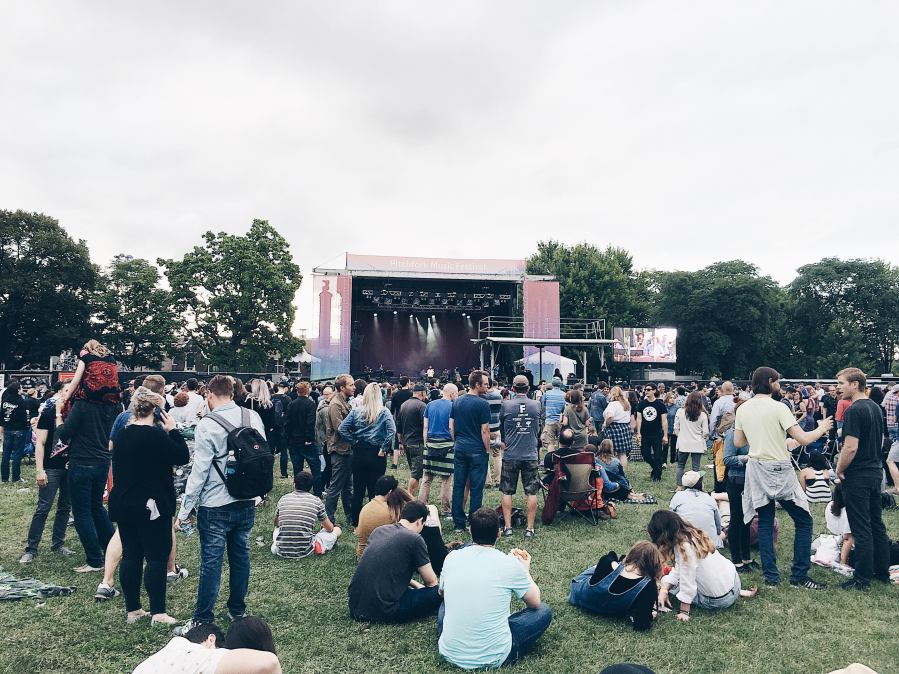 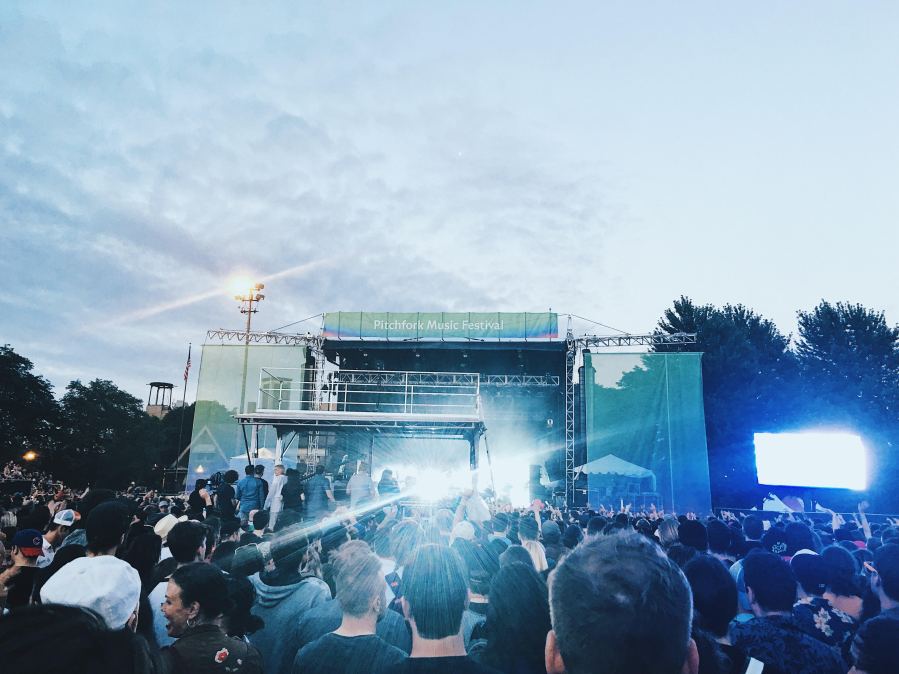 I thought of doing something different this time around when I share my Pitchfork Fest experience with you guys. I usually blog about the performances that I caught – with some video clips and photos, and of course we are still definitely going to have that! 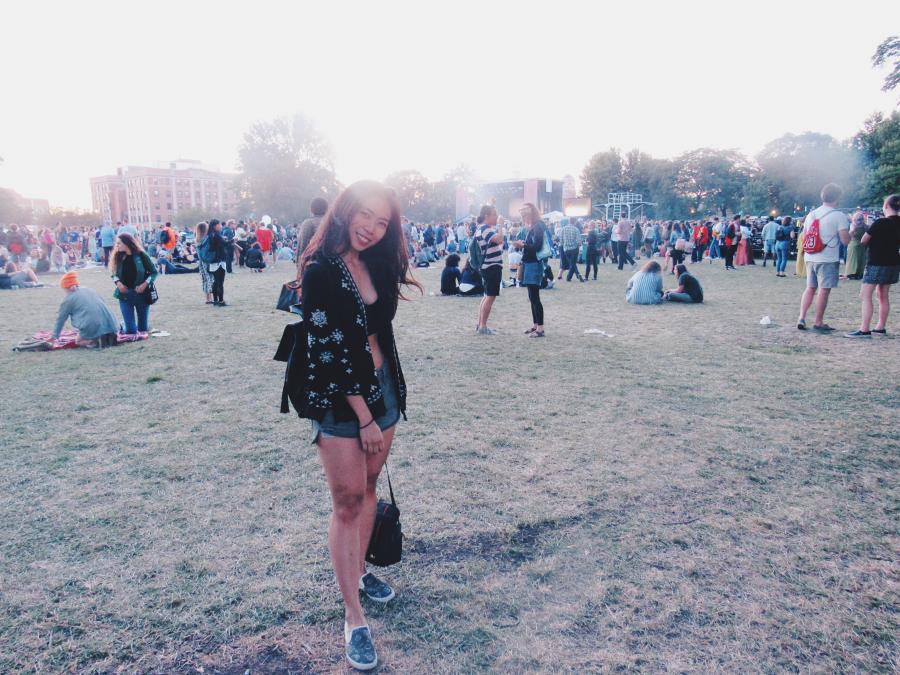 But apart from the usual components of an amazing P4kfest weekend like the lineup, the sound system, the crowd, the weather, the booths, the food, the merchandise, et. al., I’m doing a series of other things that I’ve enjoyed and/or observed from those three music-filled days. And I am starting with my favorite female performers, my girl power crew, mi lady powerhouse. (;

Here are my festival muses this year:

Before capturing our hearts with her gentle vocals and lo-fi compositions, Greta Kline was already kicking ass as the bass guitartist for Porches. Now that she is making a name for herself, I am looking forward to more releases from this meek but immensely talented lady. My fellow CHIRP DJ and Features Director, Dylan, actually did an interview with her during this year’s Pitchfork Fest. I was pleasantly surprised to find out that we share the same favorite donut shop in Chicago! You can listen to that podcast episode here.

I watch Angel Olsen in both her videos and during her live performance at Pitchfork and I have the same impression: DEFINITELY A GIRL CRUSH! Come on, she’s hot. Her voice is phenomenal, and by some celestially perfect fate, it has been matched by excellent songs (admit it, some good vocals go to waste with crappy songs). Prior her solo career, Olsen has recorded and toured with Bonnie “Prince” Billy. Her latest album, My Woman (2016), is her third full-length so far and I am happy to share my favorite tracks: uhm, ALL OF THEM (okay fine, Intern). Check it out.

This year’s Pitchfork Festival was actually my first time to watch ALL of the featured artist in this post live. And how do I even begin with Jamilla Woods’ sultry set? She reminded me of the chills and lovely feeling that I had when I first heard the voice of June Marieezy in 2012. It was like floating in clouds and you can’t help but move to the groove. She is proudly Chicagoan, and is actually the current Associate Artistic Director of Young Chicago Authors. It’s easy to fall in love with her edgy + soulful musical style, thus, I’ve played several tracks from her debut HEAVN on my CHIRP Radio show. She was also well known for guesting in Chance the Rapper’s “Sunday Candy,” and Macklemore’s “White Privilege Pt. 2.”

AHHHHKKKKK!!!!! How??? How in the world did I get so lucky? I kept telling Rom that I NEVER imagined I’d see Polly Jean perform live. I just thought that she’s too awesome my eyes might burn or something. Just kidding. I just never thought the odds will be in my favor because it is freaking PJ HARVEY maygheeed. I love her Maleficent vibe during her Pitchfork performance. Her band was on point and the set looked like an ethereal dream. She started her career in 1988 when she joined a local band Automatic Dlamini as a vocalist, guitartist, and saxophone player. She began her solo career in 1995 and has released nine studio albums since then. Rolling Stone listed Rid of Me (1993, as PJ Harvey Trio), To Bring You My Love (1995) and Stories from the City, Stories from the Sea (2000) on its 500 Greatest Albums of All Time list. Have a taste of the pretty and the badass with her 2000 release; listen here. 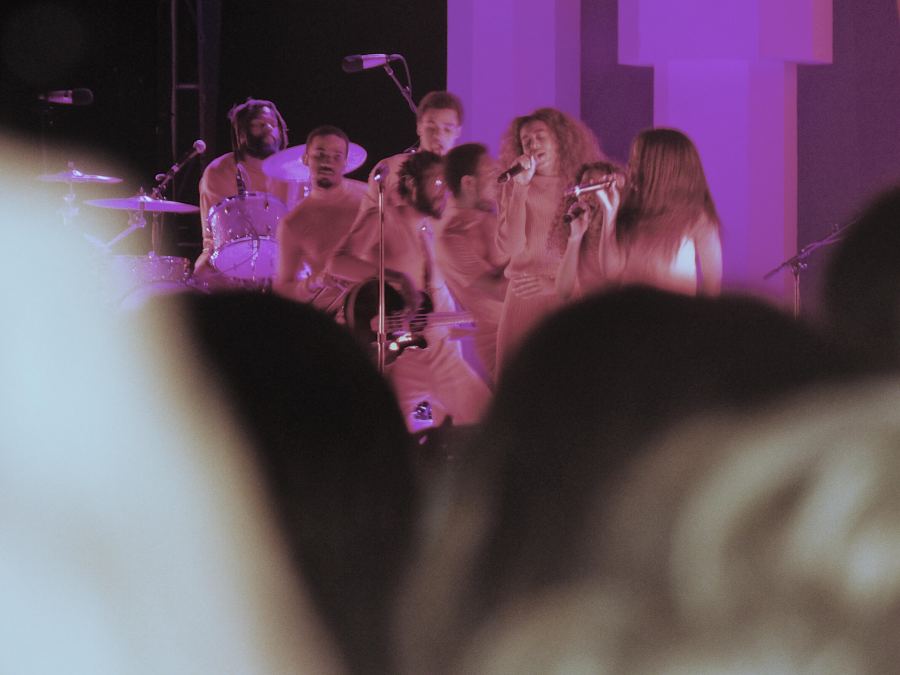 If Beyonce has a super duper cool sister that I would prefer to listen to more… oh wait she has one! Don’t get me wrong, I understand that Beyonce is Queen Bey for a reason (and I admire her) but Solange is definitely my type of Knowles. (; And seeing her headline the last day of Pitchfork Festival made it more convincing to me what kind of a badass performer she is! I truly enjoyed her latest release and third studio album, A Seat at the Table, brimming with 21 tracks. It was worth getting the number one spot in the United States in 2016, and “Cranes in the Sky” was definitely worth the Grammy Award.

Everything about the festival was amazing. But I couldn’t help but smile and celebrate the awesome female artists, or the female empowerment that I felt rather, more than the fun crowd, more than the charismatic performers, or even more than the annual event itself.