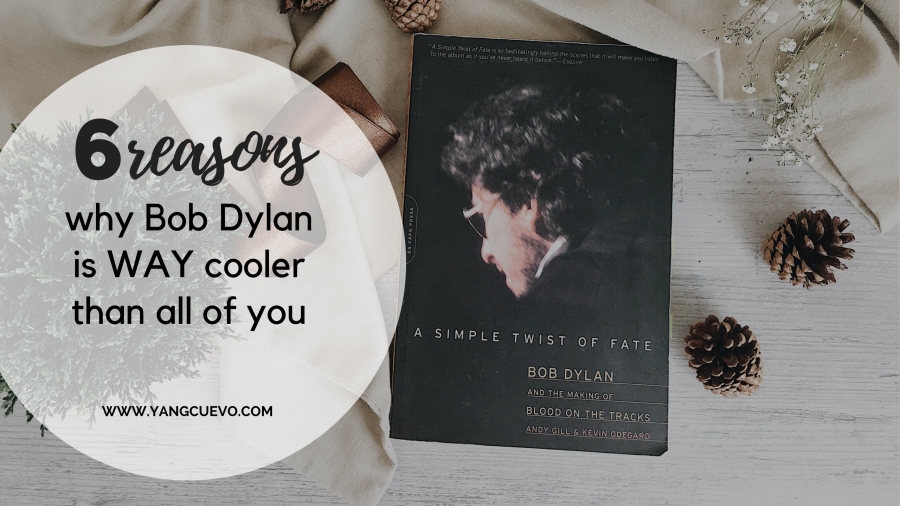 Singer, songwriter, artist, poet, author, sculptor, and now a Nobel Prize winner. Honestly, I was pleasantly surprised but not shocked. It’s Bob fxcking Dylan! Some even say it is long overdue.

His plethora of accomplishments encompasses multiple fields, because why not? His talents and personality transcends multiple realms.

Let me count the ways he nailed this master-of-all-trades thing:

“A Simple Twist of Fate” is a good biography about the great Dylan, written by Andy Gill and Kevin Ollegard. Much of the things that I will talk about here is based on the stories from this book. Bob Dylan was actually referred to as “John Hammond’s Folly.”* He was thought to be Hammond’s greatest gamble – signing up a performer with nasal whine and bluesy style. His voice, for most of the people in Columbia, sounds awfully black for a white Jewish kid. Paul Willimas said, “people don’t know what singing is. It’s delivery… how much do I hear when that voice speaks to me?” And this is exactly how Bob Dylan succeeds to communicate through music. Phil Ramone, the engineer for Blood on the Tracks recording in New York**, also stated that“…the momentum is what counts in a song, the momentum and the revelation of how you feel as you’re singing it.” Either Bob Dylan is a natural, or he has always been aware of this – or both. His imperfect, raw, and unique voice goes well with his brilliant songwriting, which consequently produces masterpieces. 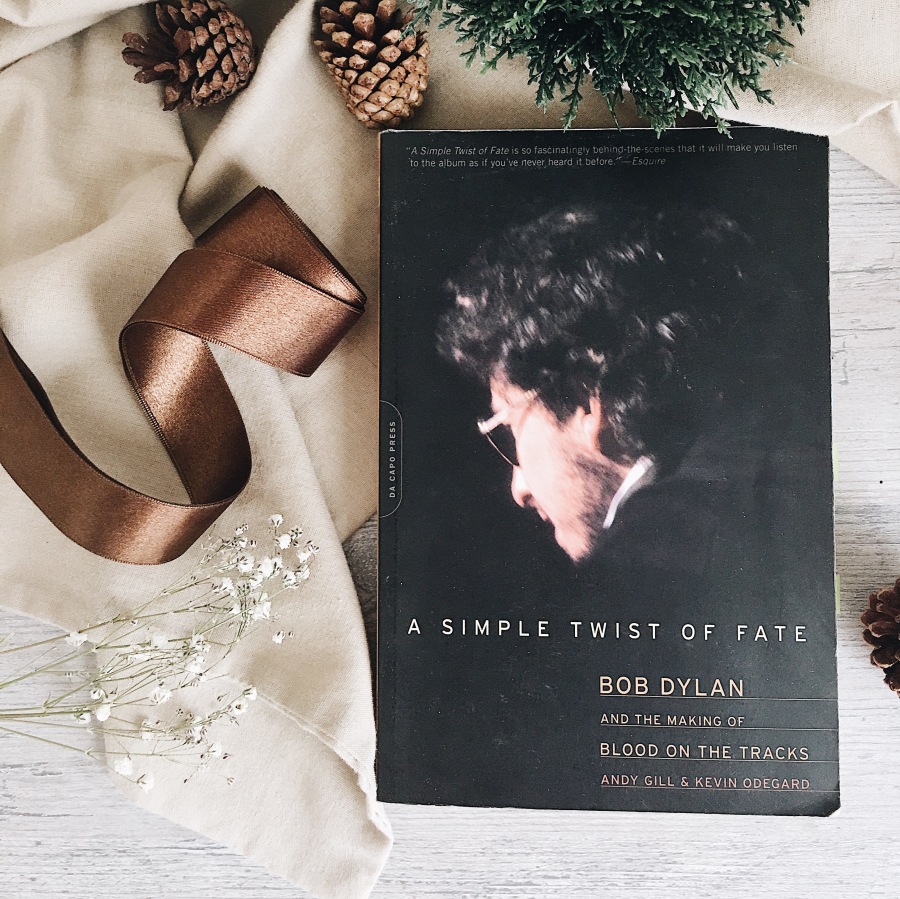 Dylan’s folk-based lyricism led to an entire genre of its own which became known as the ‘confessional style.’ After an unimpressive run for the album Nashville Skyline, resurfacing and writing tracks for the revealing, gripping, and very personal Blood on the Tracks was a gamble, “but one he knew he had to take.” It was said that he makes song on the spot, one after the other. Sometimes he would write songs, sing them at night, and never sing them again. Who would know how much valuable music has been unheard from these spontaneous compositions? As Phil Ramone correctly put it, “Bob doesn’t rehearse, Bob just starts creating!” This is intuitive talent. And analyzing the album Blood on the Tracks, one can feel how he can transform pain into beauty with creating music based on his own agonies.***

During the recording of Blood on the Tracks, Dylan was remembered by his session players mostly for being difficult during his unpredictable changes in the set of chords. It happened all the time and as annoying as it seemed, it challenged them to be free-flowing enough to go with the flow, and not think it out too much. It goes beyond technical skills of a professional musician; it teaches one to trust his or her instincts and abilities.

Session drummer Richard Crooks has this to say about Dylan: “I never thought of Dylan as a musician, but one thing that came up in that session was that this guy was unbelievable: As well as having a phenomenal memory for lyrics, he had a good grasp of musical technique. He would say, ‘Ah, I don’t like it in that key,’ and change to another, but he never capo’d anything on the guitar. He would bar-chord the changes; we probably went through six or seven different keys on just one song, and he never capo’d anything, he had all the transpositions right there, bang, bang, bang! Holy mackerel!” Also talking about Bob’s methods, Charlie Brown said that “it wasn’t unprofessional; it was just another way of doing it. Like Jackson Pollock, as opposed to one of the impressionists who would take an incredible amount of time getting it right.”***

As the first page (or at least from my copy) of his fiction, Tarantula, states, it is “Bob Dylan expressing the inexpressible.” Here’s a peek:

the lawyer leading a pig on a leash

stopping in for tea & eating the censor’s

donut by mistake/ he likes to lie about

his age & takes his paranoia seriously

Just like with music, he created his own genre as an author. It is confusing and twisted but the beauty lies in the attempts of digesting his obscure fragments and phrases.

Uh, remember when he created a massive iron sculpture somewhere in Maryland just recently? The sculpture is called “Portal,” and it is on permanent (a first for Bob Dylan) display on MGM’s National Harbor Casino. He actually had sculpture exhibitions at a London gallery sometime in 2013 but this is a 26-by-15-FEET piece. In case you’re asking, well yeah, he also paints.

The first songwriter to win the Nobel Prize, Bob Dylan was finally highly recognized as a writer. He was recently awarded ‘for having created new poetic expressions within the great American song tradition.’ The announcement of the Literature prize was actually delayed – leaving an element of surprise but not of this kind. He was not even on the list of the literary betting public over at Ladbrokes, with Haruki Murakami and Ngũgĩ wa Thiong’o as the favorites.

There were, of course,  criticisms about awarding the Nobel Prize to Dylan, being a musician primarily, and being another white male to receive such honor. (Read about my stand in this issue: In Defense of Bob Dylan, Nobel Laureate)

My admiration for Mr. Dylan’s magic stretches to eternity. And this new accomplishment officially turned that admiration into motivation – as if there’s a voice inside me that says, “I want to be like my ‘imaginary cool uncle’!” And no matter what the bitter critics say, he deserves it.

* John Hammond, a legend in Columbia Records and in the whole industry, has the power to make you drop everything when he calls.

** First recorded in New York on September 1974, most of the songs in Blood on the Tracks was briefly re-recorded in Minneapolis on December of the same year.

*** These accounts are based on the book A Simple Twist Of Fate: Bob Dylan and the Making of Blood on the Tracks, written by Andy Gill and Kevin Odegard.

Like it? Share this post so your friends can also rekindle (or get introduced to) the great music of Bob Dylan! Thank you for reading. (: Here’s a virtual donut as a token of my appreciation:

How were women traditionally perceived from where you are? I’m sharing some snippets from my current private #papercutting commission. Swipe ➡️ for a little #hyperlapse action.🙃 This is one of the most meaningful and exciting work that I’ve done so far. The client wanted a custom papercut artwork depicting a Filipina in a conventional “baro’t saya” outfit, which is mostly familiar with the character “Maria Clara.”🇵🇭 This outfit is almost synonymous to her name. She is the icon of a meek, sheltered, traditional Filipina.⁣
I have a new job!🙃 And I wrote about some of the memorable things about it so far (link in bio).🌱⁣⁣
[TW] What is your favorite moment of 2021 so far?⁣🌱
Hi fam!👋🏼 Slots for my personalized papercut maps are open again.☺️ I know it’s been a hot minute, but thank you for your patience and encouragement!⁣